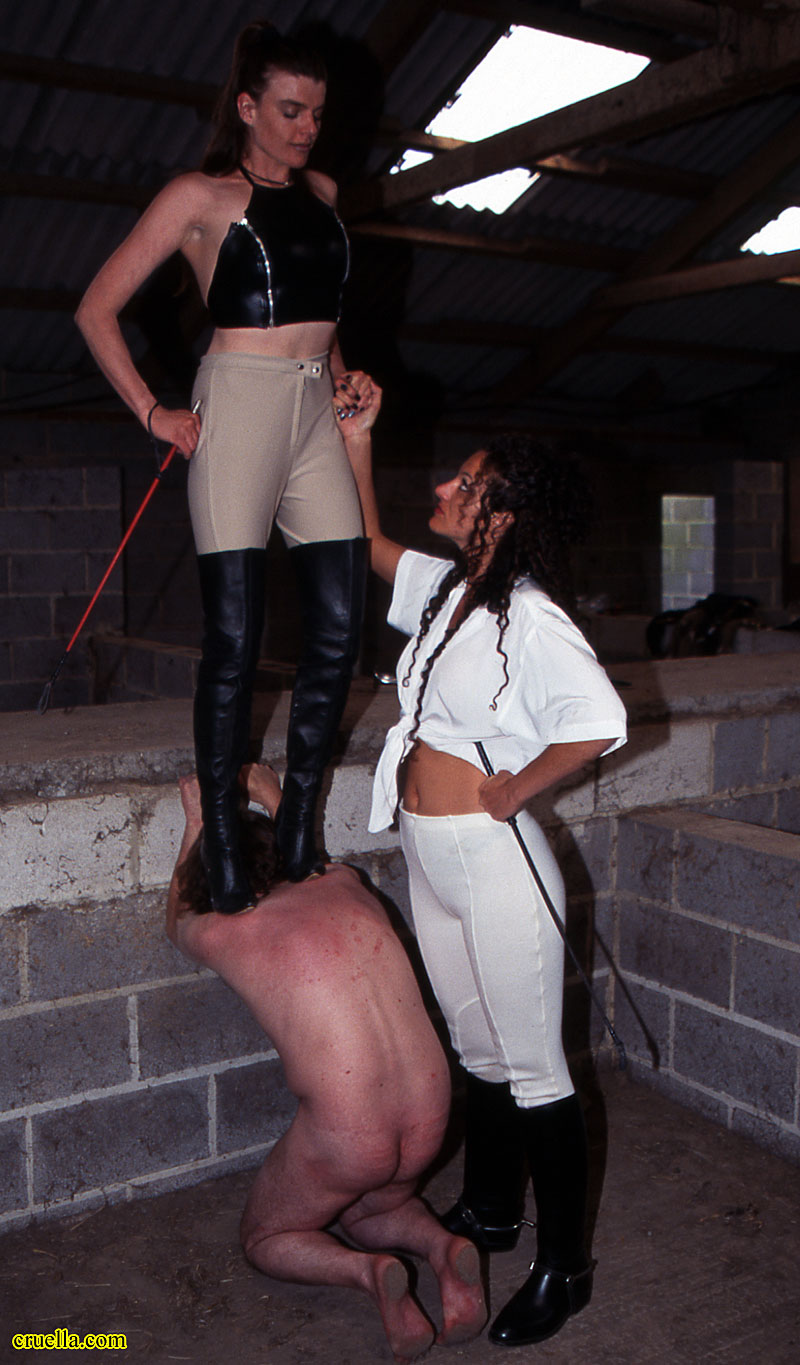 Harry loved his new job as a stable hand. Of course the work was hard but it had its advantages. He secretly had a fetish for dominant women and their equestrian attire and was able to watch the ladies of the house as they wore extremely tight jodhpurs and riding boots.

His duties included keeping their horses and the stables clean and tidy and of course to shine their equipment to the high standards expected.

During his two weeks in the job he had always received compliments from the ladies of the house about the standard of his work. Until today..

When they arrived they found the stables in a mess and they were in no mood to allow this.
“Look at the mess of this stable!!” shouted the younger lady of the house. “Get in here!” “NOW!” The orders sent a shudder down his spine as he rushed into the stable.

“Strip naked and get on your knees. You are going to be punished” barked the older lady. Harry knew by the tone that they were deadly serious and immediately stripped and fell to his knees.

They fastened a collar and leash around his neck and he was led to a wall where he was shackled and bent over.

He could hear the incredible sound of their magnificent boot heels as they walked behind him. “Stand still!”

WHACK! He recoiled in severe pain as he felt the sting of their riding crops. Time and time again he was whipped until his shrieks were echoing around the stable! “SHUT UP!!” they yelled as the stable hand suffered at their hands.

Both ladies took turns to trample on his hands as they walked along the wall. The high heels of their boots pierced his skin but Harry knew he dare not scream. They stood on his back as he felt their full wiring on his back. His humiliation showed no signs of ending..

After a while he was unshackled from the wall. “Get on your hands and knees. NOW!” He dropped to his knees. “We are going to ride you”. The ladies took turns riding him around the stable floor. They show their total dominance and control as they grab his hair and dig their boots into his side. Their crops sting his ass to ensure there is no slacking!

Finally the riding ends.  “Lie down. Face on the floor”. His humiliation continues as both ladies use their riding boots to trample on his back and head.

“You are now our slave. I want you back here tomorrow morning at 6am. Naked. Do you understand slave?” Harry whimpered “Yes Mistress”. He had suffered badly at the heels of the ladies of the house but the next morning could not come soon enough..

Mikey thought he had it made. It was sooo easy to meet girls and get laid these days. He had spotted a brunette beauty on Twitter and Instagram. Her photos were naughty and he had subscribed to her Only Fans where she had indicated a willingness to get up close and personal. Hell, she was even gonna bring a friend. She worked in a local stable and had suggested a meet up there. Eager for a naughty threesome, Mikey was on his way the next day.
He got there and they were waiting there for him. OMG. Both were even fitter than their photos. Long black hair and they were wearing the tightest jodhpurs known to man.
As both turned round, he felt himself getting aroused and slapped them both simultaneously on their peachy arses. Mikey lost control of the situation at that precise moment.
“What do you think you are doing?” shouted the taller Beauty. The girls looked at each other knowingly. Within ten seconds Mikey had received a heavy kick in the balls, fallen to the ground and had a perfect bottom in his face causing him to struggle to breathe!
“That was sexual assault..We are going to report you unless you do exactly as we say.” he heard as he gasped and winced at the sharp pains all over his body.
He was stripped and the Mistresses led him in to the stable.
“Get on your knees and do exactly as we say” was the order.
The mistresses laughed. Mikey was made to kneel on the floor and the mistresses decided to have some fun. The taller temptress was helped on to a low wall by the other. The wall was just a perfect height for her to dig the heels of her boots into Mikey’s back. She put her full weight on his back and Mikey cried out. Bad move! “Am I too heavy for you, slave?” shouted Mistress.
“No. I’m sorry” Mikey howled.
“Shut up then. It’s exercise time for you!” Mistress barked her instructions and rode Mikey on his hands and knees around the stable floor!
Both Mistresses took turns at riding him, making sure he was whipped and punished whenever he slacked!
The slave was bent over a wall, stood on, sat on and spat on as the Mistresses had their fun!
He was cropped until he begged for mercy. Mercy was the last thing on the Mistresses’ minds!
He was left broken and bullied on the stable floor until the Mistresses got bored of his simpering and whimpering!
They took some footage on their phones.
“I want you back here at the same time next week” said the taller Mistress. “We both expect three figure tributes or well…. you never know what I might “accidentally” post on Twitter”.
They both giggled and left. Mikey was left searching for his clothes, beaten and broken. Humiliated but strangely excited and knowing that his life would never be quite the same again.